Introduce yourself… What is your name & role at Muddy Boots?

Hi! My name is Karl & I am the deputy manager at Muddy Boots Poppleton

What has your journey been when it comes to working in childcare?

After getting my level 2 & 3 with adult learning service, I completed a level 3 in a preschool whilst working in an out of school club. After completing my level 3 I got promoted to out of school lead and then SENCO, before moving to Muddy Boots in 2017, where I’ve been both Investigators and Preschool leader as well as SENCO, and I have just taken on the role of Deputy Manager.

Men in Childcare offer support with workshops, careers events and open days promoting childcare as a positive career option for males. Our next event is on Wednesday 13th February at CU Scarborough.

Why do you think more men don’t start working in early years childcare?

It’s difficult to tell! Research suggests that over half of nursery workers (51%) believe men are discouraged from pursuing a career working in childcare because of ‘society’s attitude’, whilst 60% feel they are not encouraged to join the profession by others or are not comfortable working in a predominantly female environment (37.5%.)

What are the statistics like when it comes to amount of men working in childcare in York?

Here in York, only 2% of childcare practitioners are male, and that’s a statistic which is reflected right across the UK. There are only 32 Men in the childcare workforce in York, of which 19 are Early Years Practitioners.

Why is it important to have men working in childcare?

Research shows that there are huge benefits from having men in childcare, such as providing male role models, eradicating gender stereotypes and helping fathers engage with their children. Male Early Years workers are vital in making sure young children have quality contact time with men.

It has been readily acknowledged by early years practitioners and development theorists alike that it is important for a child’s development to have both strong male and female role models, especially for children from single parent families. According to a recent survey reported in the London Evening Standard 98% of parents are now in favour of men looking after children aged 3 to 5.

How can men start their path into working into childcare?

Muddy Boots nursery in conjunction with Men into Childcare York to offer work experience for males thinking about a career in childcare.

How can people find out more?

If you require further information contact me at info@muddybootsnursery.co.uk or Men into Childcare directly at info@men-into-childcare.org.uk

Firstly a big thank you for taking the time to[...] 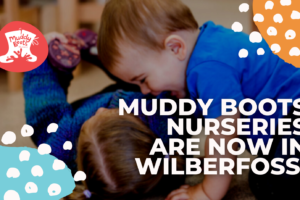 Something very exciting is happening… Muddy Boots is growing from[...] 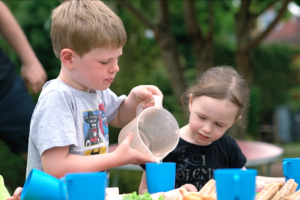 At nursery with our children we follow some basic Muddy[...]

Want more information? Register your interest? Book a viewing? Send us an email and we'll get back to you, asap.

Come and visit Muddy Boots! Book your Show Round